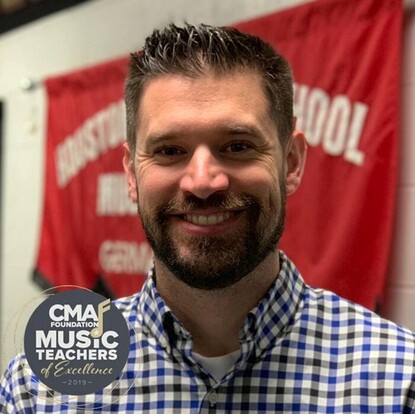 In 2008, Mr. Nesvick earned a Bachelor’s in Music Education from the University of Memphis. While a college student, he participated in the Wind Ensemble, Symphony Orchestra, Jazz Bands, and Graduate Brass Quintet. His fondest memories come from his time as Field Commander for the Mighty Sound of the South, the University’s Marching Band.

He oversees the Houston Middle School Band program, including the Houston Middle Colorguard, which consists of over 160 students grades six through eight. Mr. Nesvick is fortunate to direct the 7th/8th Grade Concert Band which has received Superior Ratings his entire tenure at the school. He also teaches the beginning band classes which start flute, oboe, clarinet, saxophone, trumpet, French horn, trombone, and tuba.

Mr. Nesvick is an active member of the West Tennessee Band and Orchestra Association and serves as the Concert Festival Chairperson for both middle and high school Concert Festivals which serves approximately 75 schools in the Memphis area. He has presented clinics at the All-West Clinic and at teacher in-services for Shelby County Schools and Germantown Municipal Schools. He has received multiple teaching awards including New Teacher of the Year and more recently Teacher of the Month for the city of Germantown. This past school year he was recognized by the CMA Foundation as a Music Teacher of Excellence.

A lifelong learner, Mr. Nesvick enjoys playing trumpet for both the Germantown Symphony Orchestra and the Memphis Jazz Orchestra. Mr. Nesvick also serves as Music Director for the Germantown Performing Arts Center’s Youth Wind Ensemble, an audition-based ensemble with members from local private and public school music programs. During his summers, he works at the University of Memphis Summer Music Camp which serves students 6-12. There, his work focuses on concert band technique and trumpet sectionals.